After 6 weeks of technicians, parts, anger and disgust (and that was just from the Operations team), the Quad Chairlift at Snow Valley is running! 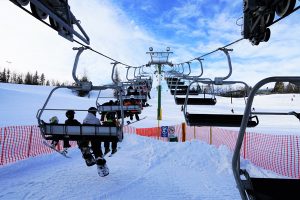 In the final analysis, we have to consider the strong possibility that the chairlift was struck by lighting during the summer.  That led to a sequence of system failures that in the end led to the entire drive being sent to North Carolina two weeks ago.  The drive is a cabinet approximately 7 feet long and slightly smaller than a standard doorway.  It weighs in excess of 700kg and not just any FedEx truck ship it.

In the meantime, our Operations team was busy doing a scheduled maintenance on the electric motor, a year earlier than warranted.

Once the drive was returned, it was a matter of plugging it back in to the power supply and the motor and turning it back on.  Then the lift was load tested and certified.

What a way to start the season!

Snow Valley would like to thank all season pass holders and all those who love to ride Snow Valley for their patience and support.

Now, get out there and enjoy the hill!